As seen in the SEPTEMBER 2017 Issue of The Canadian Business Journal.

Diamond Head Development (DHD) is a full-service construction and development company founded by General Manager Jason Wood more than a decade ago in Squamish, B.C., about a 45-minute drive north of Vancouver. The company has earned a sound reputation for its creative innovative designs and use of sustainable heating and energy distribution techniques such as geothermal, solar and heat pumps. DHD specializes in creating beautiful residential real estate communities in the Lower Mainland, Whistler, Squamish and Vancouver.

The Canadian Business Journal recently spoke with Wood, who comes from a long family history of working in real estate and development and got his feet wet at a young age.

“I remember being 16 and seeing my dad run the developments. I’d sheepishly run up to him and ask if I could invest in one of his developments and he’d help me take care of the loan and that’s really how I got my start,” he fondly recalls.

“Software and designing homes have very similar requirements in that you have to gather and organize trades or developers that you need to manage and guide with the goal of creating something for the end client.”– Jason Wood, Founder and GM, Diamond Head Development.

Equipped with an MBA from McGill and more than 10 years in the industry, Wood has traveled down numerous paths while building upon his widening career experiences, which has included stints with corporate-based organizations as well as with small software companies but the origin of all of his business endeavours has been rooted in the entrepreneurial aspect. In additional to the entrepreneurial aspect is Wood’s wealth of project management experience and product building. It’s a large puzzle that needs to be solved and there are many moving pieces to be organized, structured and scheduled. Wood says that if you want to run your own business you’ve got to put yourself out there and be the type of individual who is willing to make things happen. The only way to accomplish those dreams and turn them into reality is having the willingness to work long, hard hours and always maintain the utmost confidence in your abilities.

“Software and designing homes have very similar requirements in that you have to gather and organize trades or developers that you need to manage and guide with the goal of creating something for the end client,” explains Wood.

A number of companies within the industry specialize in either construction or development but DHD has the confidence to take on the responsibility of tackling both. However, Wood is always cautious and conservative in determining the types of projects that best suit the strengths of his practice.

“We take on projects that we know can succeed and we complete them and then move on to the next step. Being involved in both construction and development allows us to do that,” he says.

DHD is comprised of an administration and finance department and a project management division, and it is the individuals from that group that takes the lead on any given project. As managers they bring each project from the ground up until the keys are in the client’s hands. The operations team has site supervisors along with carpentry and labour teams including the safety personnel and site safety officers. Managing the firm’s relationships with the District of Squamish and all of its consultants is a responsibility Wood manages personally.

As of today, about 75% of DHD’s business originates in Squamish, of which between 80-90% would be residential, although in many instances the developments would best be classified as mixed-use. DHD has developed numerous high-end residential projects throughout the years. The most recent one added to the already impressive portfolio began in 2016 and is called Skyridge, a multi-use family community that will include a Montessori elementary school and daycare nestled amongst lustrous forest trails, a park and wonderful scenic views. DHD is the developer as well as the general contractor. 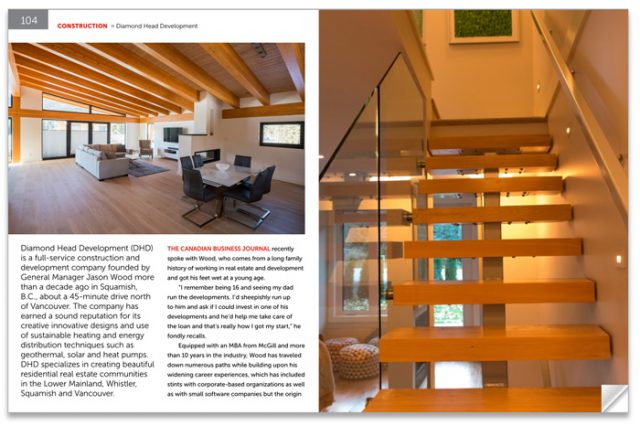 A prerequisite to constructing a community of that size is recognizing that a percentage of the overall infrastructure will be classified as commercial. DHD is building a sophisticated and complicated pump station, which would fall into that category, but Wood says the core residential communities always have been, and will continue to be, the bread and butter for his company.

DHD is able to specialize in projects that many competitors would find difficult, if not impossible, to accomplish. One such project that Wood is extremely proud of is an 11-unit townhouse building in Whistler, which was completed in June, 2015. It was a project that had been thrown around for about seven years until DHD came in and found the proper solution for the proprietor.

“When we got involved we were able to work with the ownership group and really developed the property. It was a decrepit fire hazard of a building that the whole community wanted torn down. They had no idea on how to redevelop it successfully when factoring in budget and design. We stepped in and hired a new architect. The building was redesigned and restructured from an engineering perspective and made it fit their budget,” says Wood.

The end result is that there are now 11 very happy homeowners in Whistler with a brand new condo less than five minutes from the ski hill.

The technology that is now available within the construction industry is quite remarkable but Wood says there is actually still quite a long way to go in that regard. 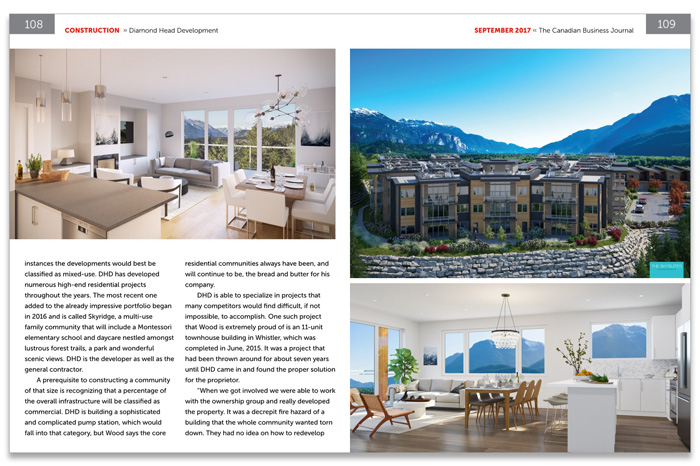 “I would say we’re about one-quarter of the way to where we need to be with the technology and building practices and where we need to get to in the next 20 years. Certainly the doors are open. It’s becoming part of our building code and bylaws. It’s finally gotten to a point where you can cost effectively implement environmentally friendly strategies into your building practices. They are now much more affordable, adding about 1-2% to the cost of the home,” he says.

Less than an hour prior to our conversation with Wood, he had just stepped away from an Energy Step Code working committee at the District of Squamish where the unified goal is to implement the strategies for the District of Squamish to introduce a the Energy Step Code program with the building community. The Energy Step Code is a set of incremental performance steps for new buildings that go from the B.C. Building Code to Net Zero Energy ready buildings. Wood says he and his contemporaries know that the government mandated program is coming so the committee has taken a proactive stance in getting a head-start on its unequivocal implementation.

DHD has earned an outstanding reputation as being a top-tier full-service construction and development company and it’s something Wood and his team have worked tirelessly to achieve. The origin of business is designing residential custom homes, which allows the company to mix custom homes with building considerably larger density residential communities.

“One of the benefits of using the Diamond Head Development is that you get economies of scale with our purchasing power compared to a builder who’s building a single-family home as a one off or does one or two of them per year. We have excellent relationships and a great cost base for everything we do,” notes Wood.

DHD is a strong corporate citizen and is a member of such associations as the Canadian Homebuilders’ Association, Built Green, EnerGuide Built Home and the Squamish Chamber of Commerce. The company also supports a number of community events and charities throughout the year.

“We’re in a small community and because of that you get to know most of the people whether it’s volunteer work such as coaching soccer or hockey. We are a big supporter of the Hospital Foundation,” says Wood.

Over the course of the next several years Wood believes DHD will continue to evolve, although he’s quite comfortable with the size of the operations.

“Where I see our next focus is picking projects that gives back to the community. Skyridge is a great example. We were really the first multi-use development of this size where we had four different housing products. A lot of developments will have one housing product. We had single family lots, duplexes, townhouses, a condominium building and you could throw in a 250-child school on top of that,” he says.

It was a conscious corporate decision that DHD selected to serve the many different demographics within the community it serves and future projects in the pipeline are going to follow that same model and approach.

“I just met the general manager of the District of Squamish now that Skyridge has been approved and is under construction and asked if we were on the right track. He said that future projects will be modeled after Skyridge with different housing types,” remarks Wood. I think 20 to 30 years from now the first thing that will be noticed is a beautiful school for kids from daycare age all the way up to Grade Six. We always want to be a part of projects that give back to the community.”

DHD is already building most of its homes to A Step Code 2 or 10% more energy efficient than a minimum code. By 2032, all homes built in BC will need to be Net Zero or produce as much energy as they consume. Any DHD home that is built towards that goal, accomplishes the following:

To find out more about Diamond Head Development, see their website >>